This entire workflow is probably too specific to be a huge help to anyone out there. Because the whole thing took me a little while to put together for myself, I thought maybe someone out there had a similar setup to mine, so I wanted to share in case it could help.

My current setup and situation (for this site actually) for using Jekyll is this:

How I Streamlined My Workflow

My solution to speeding my build and deploy process, in a general sense, was to:

So finally, here is the script, my attempt at solving this issue for myself. Instead of having to use SFTP or the --watch flag, I rolled my file updates, build commands, etc into one simple to use script.

What The Script Does

Note: Be sure to change the cygdrive directory (including the drive letter if necessary), ssh ports, user names/domains, etc to match your environment. I’ve kept things vague, but the script should be easy to understand and modify for your setup.

I have added the script to my Cygwin home directory (note: In 2018 I switched to WSL and in 2019 WSL2), given it executable permissions, and created an alias for the command bs to run this: bash ~/build-site.sh. The results are fantastic, and exactly what I was looking for when I set out on this experiment. Only the absolute minimum number of files are sent to the remote server, and they are also compressed for even more speed. 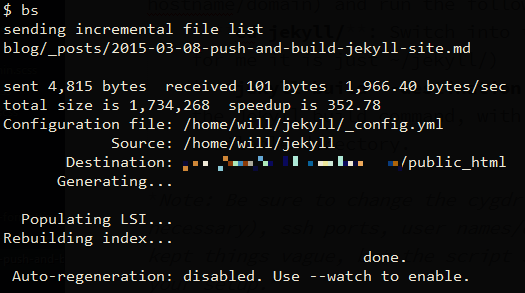 I would love to hear how I could improve this whole system, or how you’ve solved a similar problem for yourself, just head down to the comments!